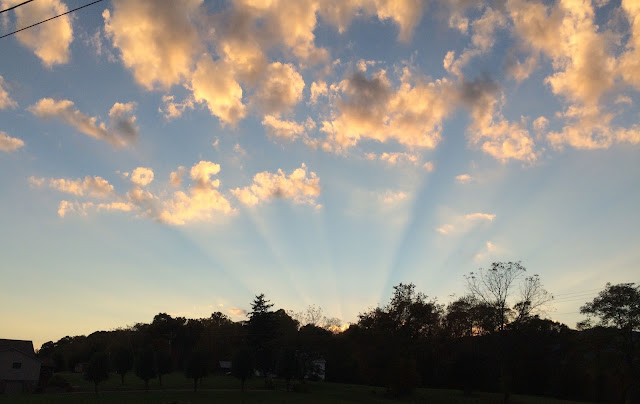 It troubles me that I don't have the time or take the time to write. So many beautiful days have passed by! The problem is that my mornings are spent away at work and if I don't write in the morning, I don't write at all. (Sigh)
I had last Friday off and B. and I drove to Douthat State Park and walked on some of the trails around the lake and through the woods there. We had hoped to hike Apple Orchard Falls but it was a little more strenuous than we wanted to do on this particular day so we'll save that one for another time. Afterward, we walked around Clifton Forge and had a late lunch at Jack Mason's Tavern. It was a pleasant day in every respect.
Over the weekend, Steve continued work on the shed. The roof is now shingled and we await cedar siding to be shipped. It's coming along slowly but surely. Of course, I concerned myself with the future landscaping around the shed and I bought five adorable raspberry bushes called Brazelberries to plant along one side. I was a little eager in my purchase and the beds won't be ready until spring, so the raspberry shrubs will have to overwinter by heeling them into the raised vegetable beds. What I like about these Brazelberry plants is that they stay nicely mounded and compact and they won't grow out of control.
On Sunday afternoon we went to the monthly Star City Brewers Guild meeting. This month they (we) met at Big Lick Brewing Co. in downtown Roanoke. It's a great little spot with a friendly atmosphere. The brewery and taproom are typically closed on Sundays. One (or more?) of the owners are guild members so we had the place to ourselves this evening.  I don't drink beer but someone brewed a peach beer and served it on tap and I enjoyed a few tastes of that. We talked about going back on a Thursday evening for Trivia Night. We hear it is a lot of fun.
Henri and I still take walks frequently. The photo above is of the setting sun's rays fanning out from the horizon. It's getting harder to squeeze in the time for a walk before it gets dark nowadays. Sometimes we just sit out on the front steps and watch the bluebirds play on the fence posts and in the fields. I'm still hearing crickets, mockingbirds, and crows.These days are numbered as the forecast says it will chill right down again this weekend. We're enjoying the warmth and gentle days while we can.
Many of my happiest moments during the humdrum days are when I hear from our girls or see photos and read anecdotes of the grandchildren. What joy and amusement they bring to me. Here is a conversation that Claire wrote about. Jack turns four next month:

Claire: "Jack where did you find that hickory nut?"
Jack: "Ummm... just where it wanted to be."
Claire: "On the ground?"
Jack: "In it's little nuthouse."
That is not the answer I was expecting.