The Story of a Girl and Her Horse 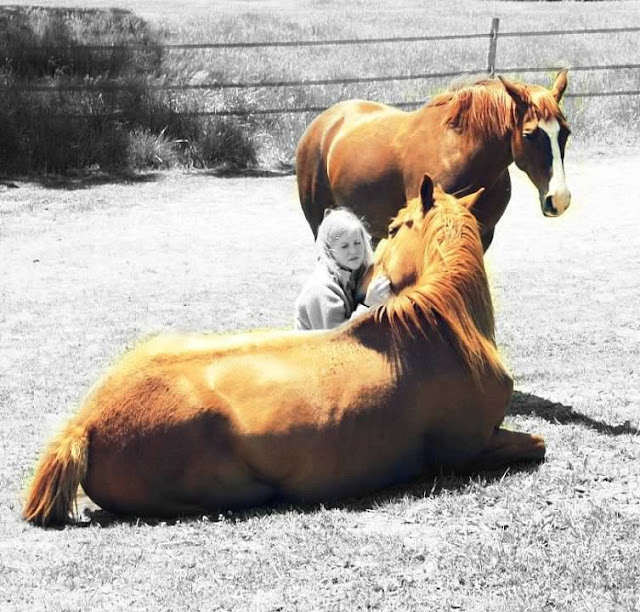 Once upon a time there was a girl who thought she was a horse. When she was two years old, she taught herself how to gallop like the horses that lived in the field near her house. As the years went by, she tied make-believe rope halters around her neck so her little sister could ride on her back. She taped real horse shoes to her hands with duck tape and ran around the house on all four of her hooves. She made obstacles from tree branches in the yard and ran in circles, jumping over them. She gladly volunteered to be the horse who pulled little sister around the yard in the red wagon. She knew how to whinny and neigh to sound like a real horse. She recognized every horse by color in the movies she watched. She only read horse books, played only with horse toys and was happiest when she was near the horses. I began to call her the horse whisperer.


As she grew older, she took riding lessons. She learned how to properly care for horses and how to judge horses in competition. She earned lots of blue ribbons in riding and judging competitions. But one thing was greatly lacking; the girl did not have a horse of her own. Her deepest desire was to one day have her own horse. When the girl was twelve years old she got a job at a horse farm. She mucked out horse stalls and kept the stables nice and clean. The horses messed their stalls over and over again and every morning the girl shoveled the mess out. She shoveled their messes for weeks and months and years. She never complained about the hard work. She saved the money she earned and bought her first horse. The horse was an Arabian mix from a long line of beautiful horses. Her name was Vandella. The girl brought Vandella home. She paid for all the horse's care and feeding and took very, very good care of her. They became best friends and Vandella was always there to be with the girl on all of her happiest days and on all of her hardest days.
Of course, the girl grew up. She became very busy at school and she fell in love and planned to be married. Vandella was still happy but the girl didn't have much time to spend with her anymore. The girl felt bad for Vandella so she decided to ask someone she trusted to find a good home for her. It needed to be a home where someone would love her and take care of her just as the girl had done herself. After a while, the person said Vandella had a new home and the girl could rest easy that Vandella was happy and safe. The girl got married and life went on. She still thought about Vandella often.
One day, the girl saw a photograph of a horse for sale. In the background of that photograph was another horse and she recognized it to be Vandella! She couldn't believe her luck in seeing her there. She contacted the owner to ask about the horse in the background of the picture and they kept in touch because of their mutual interest in Vandella. Sadly, the girl learned over time that it wasn't a good home for Vandella. Her trusted person had misled her when he said Vandella went to a good home. Vandella wasn't being fed enough and one day the girl found out that Vandella was badly injured. It looked like Vandella might die. The heartbroken girl begged the owner to please sell Vandella back to her. The horse needed veterinarian care and a safe place to live and the owner wasn't able to provide that. The girl offered the owner a lot of money and even though Vandella wasn't valuable anymore because of her injuries, the owner wouldn't sell her back to the girl. The girl became desperate to save Vandella and make up for her deep regret that she caused Vandella to go to a bad home. She asked a lawyer to help her get Vandella back. They went to court and asked a judge to give Vandella back to the girl but she lost her case. She left the courtroom in tears that day, brokenhearted with the knowledge that she would never be able to help Vandella or care for her again. She tried to forget this painful experience and to trust that God would take care of his creature in her stead.


Months later, the girl saw in the news that Vandella's owner was arrested for doing bad things to children and she went to jail. Still, the girl did not know what had happened to Vandella or who was caring for her. More years went by. The girl never stopped thinking about her horse nor stopped searching for her. A few times each month the girl scoured online ads in hopes of seeing Vandella. One day, many years later, the girl saw a picture of a horse for sale on craigslist. Her heart started racing and her mind exploded with unbelief! It was a picture of Vandella...for sale! The girl didn't know who placed the ad and she was afraid it might be the awful owner who might recognize her if she called about the horse. She wasn't sure what to do but she feared someone would buy the horse for slaughter so she threw caution to the wind and called to ask if she could see the horse. The next day she went to the farm and there was Vandella! She was owned by a nice man who had too many horses and only a muddy paddock in which to keep them. He said that he bought Vandella from the previous owner because that person wanted money for drugs. After all those years of searching and yearning, things happened very quickly. The girl bought Vandella from the nice man on the spot. Within days, she got the proper paperwork from the vet, found a good stable where Vandella could live with lots of rolling fields and grass for her to eat, and she brought Vandella home.
The girl now shares Vandella with her own little girl, who also has come to love the horse. The little girl pulls up grass to feed Vandella just like her mommy did all those years ago. The girl's heart is happy because now she can be sure that Vandella will live out the rest of her years in peace and comfort.
The girl isn't sure if Vandella remembers her. The poor horse suffered much trauma and was focused on survival for many years. But, she comes right up to the girl and takes treats from her hand. She is an old horse now. She was only eight years old when the girl first bought her and now she is twenty. She is still a beautiful and spirited horse who has proven that she is tough. I saw her myself yesterday and it did my heart good. I offer prayers of thanksgiving to God for granting my little girl one of the desires of her heart. Here is a story with a happy ending.