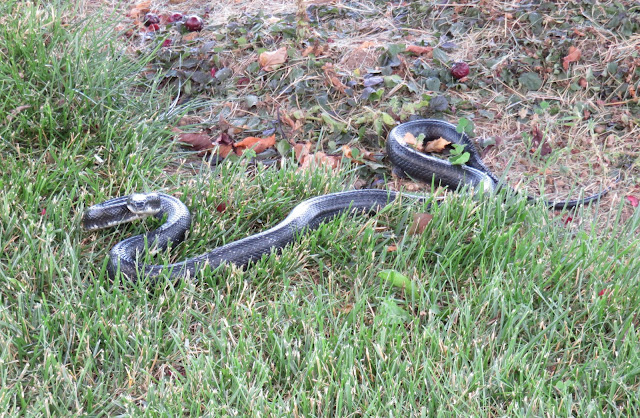 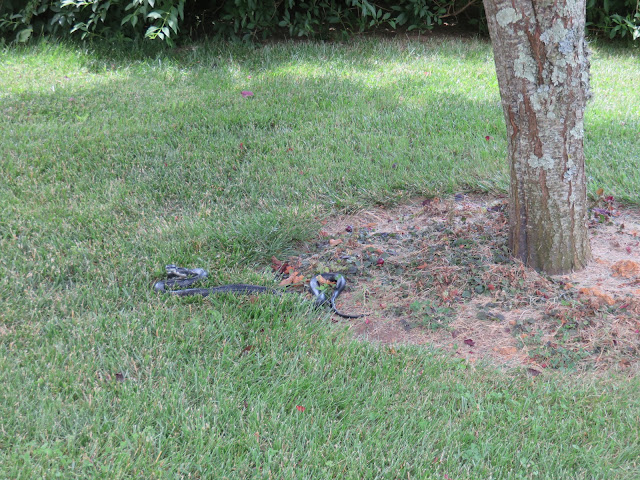 Earlier this spring I read that there would be a high number of snakes in Virginia this year. Lo and behold, I have already seen many. Typically, I will see one or two on the road throughout the summer but this year I have already seen four in two weeks time. The last one was in the yard.
On Monday, I was relaxing by the pool (as in kiddie) and I saw two Brown Thrasher birds hopping around the trunk of the plum tree. At first I thought they were fighting with each other. Steve watched from his porch seat and I from the pool as they hopped in circles around the trunk for several minutes. Then Steve said, "There's a snake there!" I stood up and sure enough there was a black snake and the birds were hopping on it and fluttering back and forth as they attacked it with their feet. The snake was languid about the whole thing until Steve went out and shooed it away. Unfortunately, it went straight under the forsythia bushes where there erupted a panic and noise from within. The mockingbirds had set up house in those bushes and when they saw the snake all heck broke loose. It was pure mayhem as birds squawked, branches shook, and three baby birds came hopping out from underneath. We stepped back as the battle raged inside the bushes. We watched as other species of birds swept down to investigate the commotion. Thrashers, mockingbirds, blackbirds, and martins all dove down and swept past. Two blackbirds actually entered the fray and Steve's commentary followed with, "Here come the blackbirds to save the day." We had never seen anything like this and it was more entertaining than any action adventure movie.
Well, all of this went on for a good twenty minutes until I finally decided to visit Mrs. Cahoon with an apple pie. The birds and snake were fighting it out within the bushes and whatever happened happened. When I returned forty-five minutes later, all was quiet. Steve had continued to watch and he was convinced the birds killed the snake. I was more inclined to think the snake slunk away unnoticed by Steve's eyes. We may never know.
What I learned, according to this article, is that snakes like brush piles and railroad ties. We have both. We also have a wood pile and I know snakes like those too. What I also learned from this article is that it is generally illegal to kill snakes in Virginia unless they are a hazard. I don't mind having these black snakes around because they keep the mice and rodent population down. However, even though not venomous, they will bite when provoked and I really don't want to come into a close encounter with one. Steve was bitten by a snake years ago when we lived in Alabama. He never saw what bit him, but there were two punch marks on the back of his leg it made him sick and damaged the skin on his leg so badly that he needed to go to the E.R.
Because of all the snakes I have seen, I am more vigilant when I walk outside these days. I try to scan the ground ahead, walk with a stick, and weed very, very carefully around the railroad ties and rocks that form the hardscape in one of our flower beds. I will also need to give the grandchildren a brief lesson in snake awareness when they come to play on the property. We will learn to coexist with them as best we can and I hope and pray that we only see black snakes and no rattlesnakes or copperheads...please!
Posted by Leonora