Balmy, Birds, and a Chick 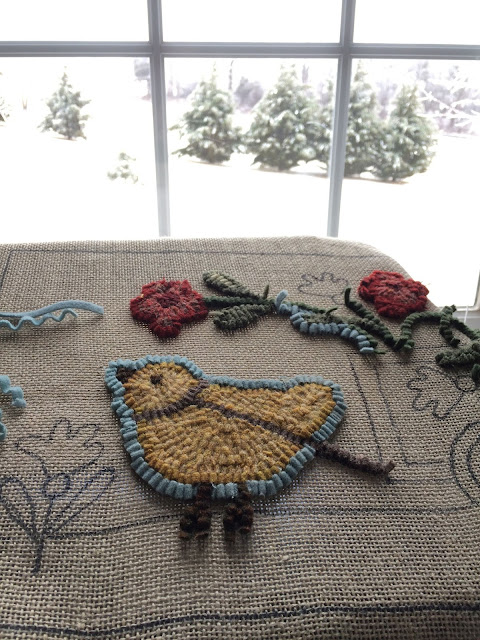 Using the word, "balmy" to describe the weather in the month of February is not something I take for granted. It began raining on Saturday and continued into Sunday, but it turned so warm that the rain was no bother at all. To step outside on Sunday morning was to step into spring. Low-lying fog had settled in all the hollows, which always looks beautiful in these mountains. The ground squished like a sponge when I walked in the field. By afternoon it had reached sixty-one degrees so I cracked open the kitchen window to let in some of that balmy air.
The birds must love this mild, saturated weather because they were all over the yard. We've been seeing flocks of robins for a couple of weeks now. (To my northern family and friends, I'm sure they are headed your way!) Yesterday they were joined by bluebirds, cardinals, and blue jays. Steve and I really enjoyed watching them out the window, The cardinals are here year round, but I'm not sure about the others. I thought they were all migratory birds but, I learned all of that during my childhood in New York, so maybe Virginia is where they migrated to. I don't know about any of this from the Virginia perspective. Anyway, it was fun watching the birds in the crab apple tree, especially the bluebirds, which are my favorite.
During the ice storm last Sunday I started the small, tabletop rug with a spring theme, pictured above. I'm also finishing up a small, cupboard door rug with a heart on it. Just in time to hang for Valentine's Day. I didn't intend it for such, it just happened that way : ) I'm waiting for the paint to dry on the cupboard door and I'll post photos of that project tomorrow. In the meantime, enjoy this beautiful song by Robin Trower called, "Bluebird".