A Connection With the Infinite 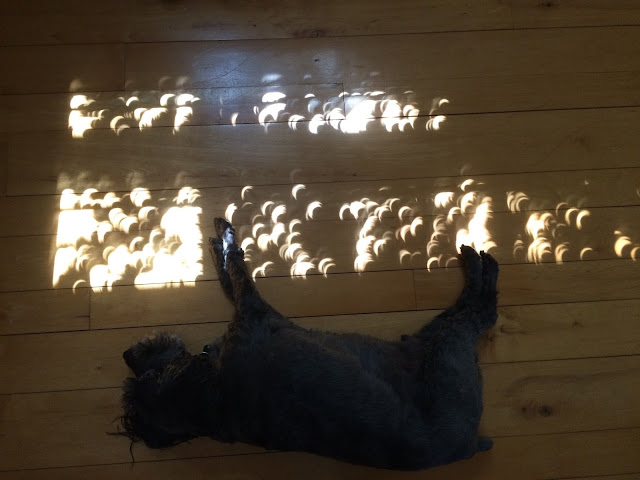 Like millions of folks who stepped outside at the appointed hour last Monday to view the eclipse, I stepped outside with my special glasses and looked up. It was a marvel to see the moon pass in front of the sun. What I found more exciting, however, was the dimmed, eerie light of the landscape at that appointed moment in time. Maybe it was my imagination, but everything sounded hushed for about half an hour. The crickets were quieter, the cicadas toned it down, and the birds chirped only a little. When Tess, Ian, and I returned inside we looked down at the floor and saw little eclipse shadows filtering through the window. It was a pretty sight and we began to marvel all over again at this little unexpected surprise. Henri plopped down right in the midst of it because, well... he's just a little dog and he was oblivious to stellar occurrences like solar eclipses.
The excitement and shared experience of the eclipse last week was something rare and wonderful. It was an event entirely out of the hands of man and I think we could all appreciate the beauty in that. Our pastor mentioned something Tim Keller said. He said, "There is a hunger for intimacy with the infinite."And this is true. There is another quote by Blaise Pascal,  a seventeenth century mathematician and theologian. “What else does this craving, and this helplessness, proclaim but that there was once in man a true happiness, of which all that now remains is the empty print and trace? This he tries in vain to fill with everything around him, seeking in things that are not there the help he cannot find in those that are, since this infinite abyss can be filled only with an infinite and immutable object; in other words by God himself.” I love this. Something to think about...
Steve, Tess and Sky played the Revelation Song at church last week and this week the congregation all sang it together. The lyrics are going around in my head. "With all creation I sing, praise to the King of Kings." Whenever I see something beautiful or marvelous in nature, I think of God. Everything from the whorls on a tiny sea shell to a celestial occurrence like an eclipse points to our Creator.