I detoured down a rabbit trail and traveled through time this weekend. I discovered that time travel messes with the head and leaves the traveler detached and confused. Goodness! In order to preserve my connection with the present day and not be trapped permanently in the past, I had to periodically walk away from the time machine and have conversations with people in the here-and-now. Let me explain...
Last week, I received a phone call from a stranger. It was a woman who was searching for someone. She was trying to help a friend, who was born in 1959, find his birth mother. It was a compelling story and I wanted to help her but, after comparing notes, I quickly surmised that the family she was seeking was an entirely different branch of Giacominos than mine. The name, Rocco Giacomino, is more common in Italian families than I realized. The old world method Italian families used to name their children creates many of the same names through the generations. For example, I have a grandfather, an uncle, and a first cousin on my father's side all named Rocco Giacomino. This stranger's Rocco Giacomino is buried in New York City and mine is buried in Albany. We are not the same family. However, studying their graves is what led me to my adventure through time.
This woman told me to go on a website called www.findagrave.com. After I finished speaking with her on the phone, I went to the website and typed in my father's name. It brought me to photographs of his headstone at the National Cemetery in Saratoga, NY. My mother's headstone was also photographed in that cemetery. I felt thankful to be able to see these photos because the cemetery is six hundred miles away and I haven't gone there since they passed away. Under each photo they had a link with the photographer's name. I decided to thank the photographer for her work by leaving her a message there. In doing so, I noticed another message to the photographer from a man inquiring about my father's war service. I had the information this man was seeking, so I clicked on his name and was able to email him. This connection was the portal to a whole series of incredible travels back to 1944 and 1945 and particularly to World War 2.
The man with whom I corresponded is a citizen of Belgium. He is an active duty, 551st paratrooper. Our paratroopers, including my father, who fought in the 551st during World War 2 are their heroes. Our soldiers fought key battles on their soil and freed Belgium from the Nazi occupation. Each year they hold a memorial in the Belgium Ardennes for our brave soldiers. This young Belgium soldier has come to America numerous times to meet the surviving veterans of the 551st Parachute Infantry Battalion of which very few now remain.
After our conversation, he suggested I join the group, "Friends and Family of the 551st Parachute Infantry Battalion". I did so and from there events simply exploded. The photo below is from my father's scrapbook. It shows the 551st PIB drop over France in August 1944. My father is one of those paratroopers in the photo. I learned in my time travels from a French citizen that this drop occurred specifically north west of the village of La Motte. After these soldiers parachuted in, they marched and fought their way to liberate town after town from the Nazis. It was during my father's small part in this invasion that he was given a calling card from a French citizen who befriended him and other soldiers. The French people had suffered terribly under the Nazi occupation. Not only physically, from lack of food, but emotionally as well. As I've been told, they were overjoyed when the Americans arrived. They shared what little they had with our soldiers and provided them with barns and other places to sleep.

My father saved this small calling card for his entire lifetime. I always thought the handwriting on it was so beautiful. I decided to post a picture of the card on the 551st website, just to share this little treasure with folks. In doing so, it caused my time machine to explode with activity! you see, time travel in our modern age causes things to happen almost instantaneously. Within minutes, I met people from all over the world and learned that the man who wrote the card is still living! His family still resides in this same place. Not only this, but I was able to correspond with his daughter! Her words to me were so beautiful and kind. These people are still filled with gratitude for what our soldiers did for them. Here is a photo of the calling card. I also now have a picture of the dear man who penned it. 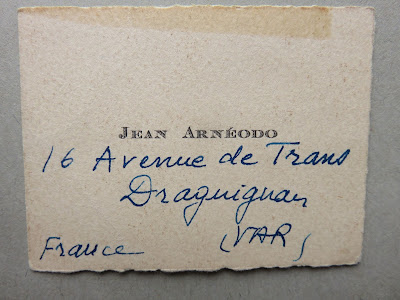 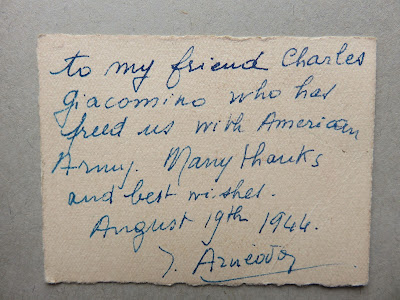 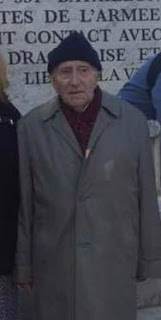 His daughter will visit with him soon and share my picture of his calling card. Her father and my father were friends for a very brief period on this earth. They remained friends in their hearts forever.
I continue to travel in time, coming up for air frequently so I don't become lost in time forever. As I said, time travel leaves the traveler exhausted and twisted inside. It's both painful and exhilarating. And this is only the beginning! I have another amazing story to tell that is almost too hard to believe. I must spend some time in the present day, going to work and fulfilling daily obligations before I can plunge back into history. Until then...!