New Hampshire and Back

Ten days ago I got a phone call from Daughter #2 and "The Plan" for the summer suddenly went out the window. "The Plan" was the expected arrival of her second baby around June 20th after which Steve and I would drive up to New Hampshire and spend two weeks helping out. Instead, her worried voice over the phone this day told me the baby was arriving very early and very quickly. It was a Friday afternoon and I had just gotten home from school. We were in a weather pattern of long days of soaking rain and it felt good to get inside and dried off. Once I heard Chelsea's voice over the phone, however, there was only one decision to make and that was how quickly could I begin driving to New Hampshire. I made a phone call to Steve and a quick call to my job and then I began packing. I had to force myself to walk away from disorganization and commitments and give up control entirely. I also had to face the fact that I would be making a very long drive by myself- something I have shied away from for the past couple of years. But when someone we love is in need, the adrenaline and drive kick in to accomplish things we normally might not do. In this case, to fight hell and high water to get to my child in need. My perceived hell would be driving seven hundred and thirty miles of interstate alone and the high water was falling from the sky.
Twenty-five hours after leaving my house, I arrived in New Hampshire. Those twenty-five hours included white knuckle driving through pouring rain and road spray while staring through rapidly moving wipers through six states. (The rain had stopped by state number seven.) It included a multitude of tractor trailers that never slowed down, several pit stops to receive and send text messages, three stops to consult GPS, tossing said GPS aside and digging the road map out of the trunk, an overnight stay in a very nice hotel after it got too dark and harrowing to drive, the 'finger' from a nice young man in New York whom I didn't see trying to merge in front of me, too many dead deer on the roadside to count at which I prayed to God to spare me from hitting anything, and one car accident that thankfully didn't involve me and didn't look too serious. I never allowed myself to think about how I was going to get back home. 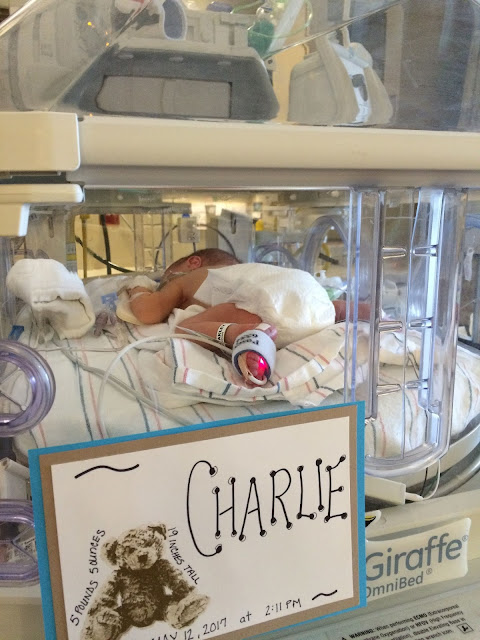 Charlie was born before I even left Virginia but I didn't know this until hours later. He was six weeks early and he was in very good hands. I learned all this news while I was in transit. He hadn't been named Charlie yet. The naming occurred after a series of text messages between Chelsea and the family in which I was unable to participate because I was driving. He was name after my father, Charles. Both are strong, stubborn fighters. My arrival in NH meant that I could care for Hugo while Chelsea and Simon spent every hour at the hospital. Hugo is sixteen months old and the last time he saw me was in February. At their apartment I knelt down to Hugo and said, "It's Nonni." He looked at me and came into my arms, then he went over to my photograph on the wall and pointed to it. I was amazed that he put this together! I suspected everything was going to be alright and it was.
After a bit of slushy snow the following morning, everything began to look brighter. The sun came out and Hugo and I fell into a routine. I mainly kept him out of harms' way while he explored. Most of my photos show Hugo from behind because that was usually where I was, behind him and trying to keep up with him. We took walks in the beautiful, quaint New England town they had just moved into two weeks earlier. We visited the organic farm Simon manages and went to the hospital a couple of times to visit. We shared our meals, rocked and sang songs in the middle of the night, and laughed during bath time. I learned some French nursery rhymes that became stuck in my head even after I returned home and I took some videos of Hugo to share with Steve (and for me to watch again when I miss him.) I got to know my grandson and he got to know me. 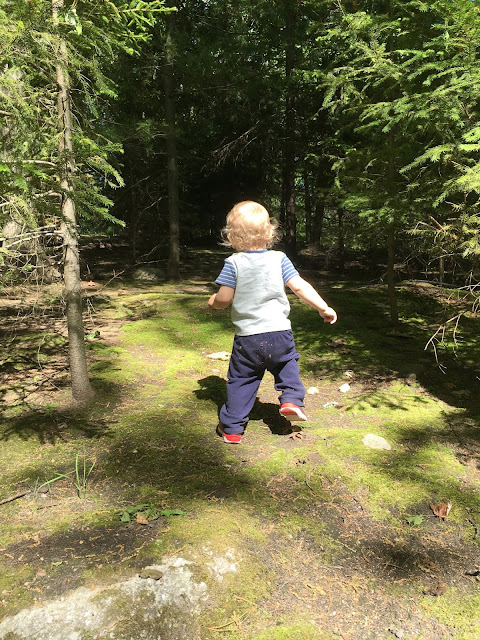 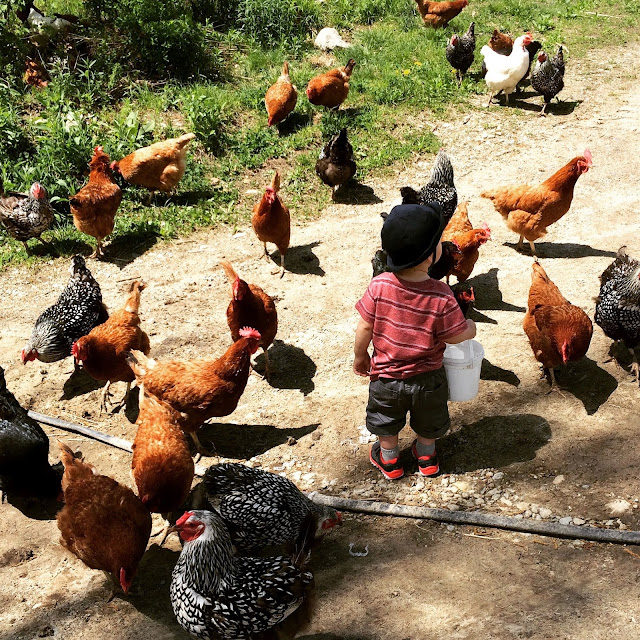 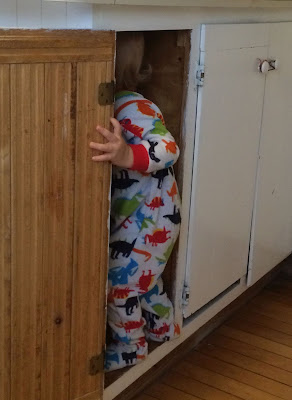 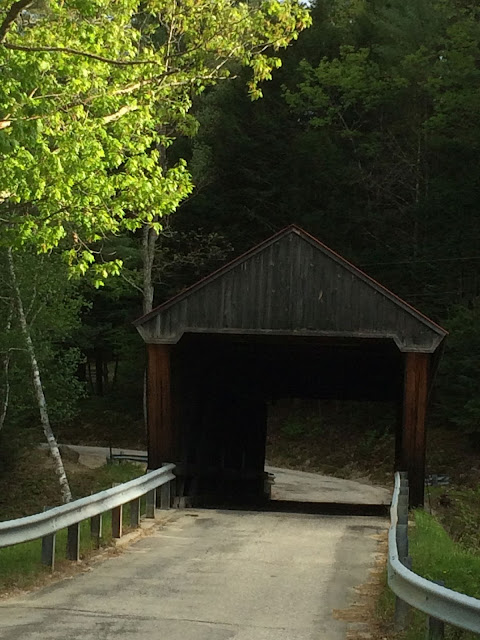 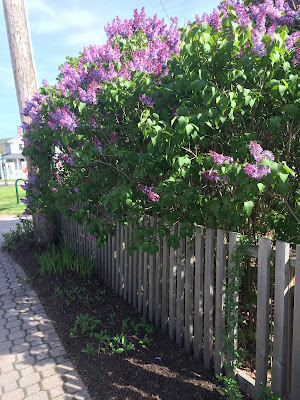 While Hugo and I played, ate, and slept, Charlie grew and was slowly weaned from oxygen, the CPAP machine, the IV, and the isolet. Chelsea came home to sleep for the last three nights that I was there while Simon continued sleeping at the hospital. It was nice to have a couple of evenings with her and for her to have some time with Hugo. It was difficult to leave Chelsea's little family and return home. I knew everything was going to be alright and Steve and I would return in a few weeks. On the day that I left, eight days after Charlie was born, I was able to hold him for the first time. I was overwhelmed with emotion, seeing his little person and knowing that once upon a time in history, he would not have survived. I was sad to be leaving Hugo and his parents. All these thoughts would stay with me as I drove those seven hundred and thirty miles in reverse. Except this time the sun was shining in a blue sky and the world was green and bright. It didn't look anything like the drive I made the week before. 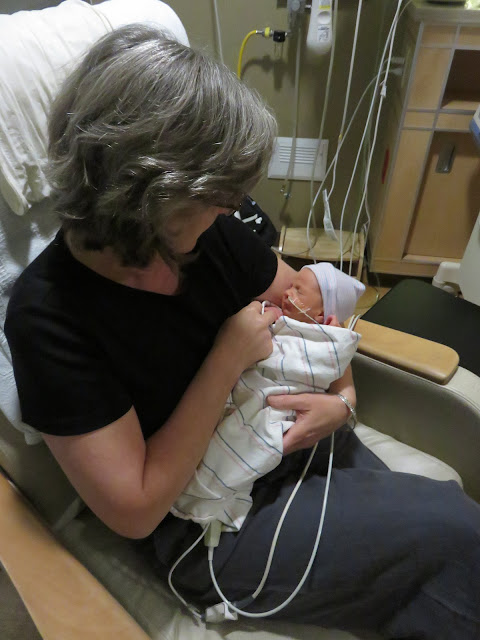