Preface
The Future reached back into present day time and, in that surprising way The Future has of sneaking up on us, showed up early on May 12, 2017 with the premature birth of our fifth grandchild. Within hours I was on the road headed north to New Hampshire. I wished for time travel to operate at warp speed or for Scotty to please beam me to NH as I drove those long fifteen hours. A strong desire to gaze upon this tiny, newborn, bit of future fueled my adrenaline, along with three cups of coffee. I received updates along the way and learned baby was okay and his name is Charlie. Our daughter says he is strong and he is a fighter and he is surviving against some odds, so they named him after my father, Charles. We are all filled with joy. Please keep Charlie in your prayers along with his family. His mom will need to leave him behind in the hospital for a couple of weeks and that will not be an easy thing to do.
Now, let me take us back to our story! As I mentioned previously, my father was a musician, before, during, and after the war. By the time I was born their music was in full swing and our home was filled with both music and instruments. I recall our cramped little kitchen serving as a rehearsal venue for my father and his fellow musicians. My mother was also musically gifted as a singer and pianist. She could play any song after hearing it once. She couldn't read music at all, but she could play anything by ear and make a grand show of it. My father had met his perfect mate in 1946 and they were married in 1947. Over the years they had a variety of drummers and accordion players they drew from to form trios and quartets. From the time I was very young, my parents would be out on weekends, making music and making extra money for our family of five.

We had a room in our home that we called The Music Room. It not only held my parents' instruments, it also displayed my father's collection of war memorabilia. The walls were covered with photographs, a couple of mounted guns, medals and citations, etc. One of the largest items in the room besides the piano was a bass. The bass was old from the time I first recall it. My father rarely played it and he never took it out of the house. I thought it was because of its delicate condition.We children were not allowed to touch it.
Fast forward in time to 2015. My husband and I had the daunting task of emptying out my family home in order to move my mom to Virginia to live with us. She was ninety-two years old and had lived in the home since 1952. It was a sad time and there were many things we could not take with us. However, my husband insisted we take the old bass. I argued with him that it was so old and in such rough shape that it really wasn't good for playing, but he insisted we keep it. It was one of the last things we loaded into the truck that moving day. There was no room left for anything, but Steve found a place for the bass on the back seat of his pickup truck. Back home in Virginia, we placed it in the corner of our home office.
When Frank van Lunteren first contacted me, he was searching to identify the men in the 504th PIR Jumpmasters band. Last week he identified Donal O'Buckley from bits and pieces and photos. O'Buckley is the bass player in my father photos. As I sat at my computer corresponding with Frank, I turned and looked at that old bass sitting in the corner. I realized that I never knew where the bass came from. Steve had researched it a little bit last year and we knew it was marked "Germany" inside. We speculated the impossibility that it could have been borne out of the war, but that idea always seemed too far fetched. In light of researching these Jumpmasters photos, we compared the bass in our home with the bass in the old photos and we noticed the same crack lines and indentations as well as the same overall structure. Our curiosity was piqued! I asked Frank if it could be possible that this bass was the same one from the photos. At that same time, Frank was searching for Donal O'Buckley's surviving children. He quickly put me in touch with O'Buckley's daughter, Donna. Her father and my father were buddies during the war and they remained friends after. They went their separate ways to raise families, etc., but they always spoke fondly of one another and held their bond from the war very close. Frank urged me to call Dona right away. I did and she told me an amazing story. 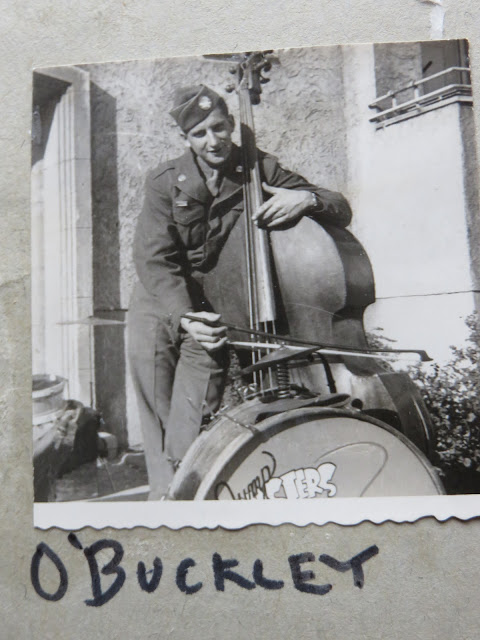 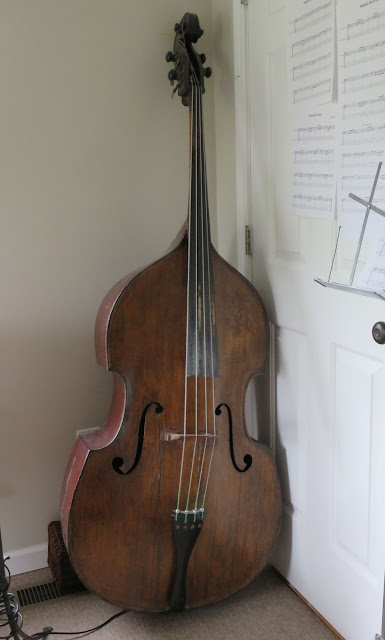 She said when her father was in Berlin at the end of the war, he saw a German man going through the garbage looking for food. Her father felt compassion for the man and offered him some of his K rations. The man didn't want to take the food without giving something in return, so he offered to give O'Buckley bass lessons. During the American occupation of Berlin, O'Buckley went to the man's residence regularly for lessons in exchange for food. when it came time for the soldiers to leave Berlin and head home the German man told O'Buckley that he was the bassist for the Berlin Philharmonic and he doubted they would ever perform again. He then gave O'Buckley his bass. (Is your mind putting this together as was mine at that very moment?!) "But...". I asked Donna. "How would they ever got such a thing back to the States?!" She said her father told her they dressed the bass in clothing, a uniform (?) and sneaked it aboard the Queen Mary (or whatever ship it was) and stowed it in a bunk on the ship. After disembarking, O'Buckley beleives he never saw the bass again. Donna said, "We always wondered what happened to the bass!" "Well", I told her, "We might just have that bass right here!" As unbelievable as this story sounds, it makes perfect sense to me.
My imagination created a story to satisfy the legend of the bass. It goes like this: The story above is true. After sitting untouched and dormant for decades, the bass was suddenly moved to Virginia. Its strings were tightened and plucked by my husband. Once again, it played music and had a voice. The bass was reawakened! now it longs to go home, wherever that may be, and it's trying to tell us where it belongs. The ending is yet to be written.
We would all love to bring closure to this story; to find the happiest ending to a sad story of war, a love for music, compassion for a hungry man, and friendships. I'm not exactly sure what the next step will be, but I can be sure Donna O'Buckley and I will keep in touch as we try to verify that these two basses match. I hope the bass will continue to remind us of its voice and where it longs to be. For now, Steve has loosened its strings to remove any tension and stress on the wood. We will also utter the same words to the children that my father said to us all those years ago, "Don't touch it."