Up Up and Away

-  It was the end of another sweltering, hot and humid week. We drove down the road, headed for Raleigh for a weekend with the children and grandchildren. We passed the nursing home at the end of our road and I saw a large group of residents parked under the portico in various wheelchairs. One or two were set apart, out in the sun, still covered with blankets even though it was eighty seven degrees. Almost all were asleep or resting. It was a sweet vision but it still struck me a little funny. It looked like someone was housecleaning and all their belongings had been set outside to air. It was the first thing that popped into my head and I turned to Steve and said, "Look! All the residents have been set outside to air."

- For the first time, we actually stopped in Hillsborough, NC on our way to Raleigh. It's a pretty little town and we've often commented how lively a place it appears. We chose to have dinner at Hillsborough BBQ where they serve North Carolina, vinegar-style, pulled pork barbecue. Business was very busy so Henri, Steve, and I sat outside on a bench along the sidewalk while we waited for our order. There were a few tables outside and I saw a a lady seated there with a large Labradoodle-looking dog at her feet. A server went to the lady's table with a styrofoam container of barbecue and set it down on the ground and opened it up for the dog! He neatly ate it all. Definitely a pet-friendly place I'd say. Henri would have died if he ate such a meal, but we did give him a few tidbits as a treat. 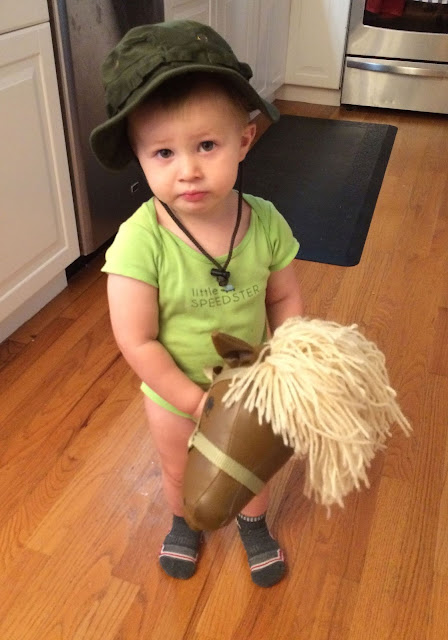 - Obviously, the grandchildren are a treat for us. They are forever entertaining and adorable in their own individual ways. Mari now reads books to me! I needed a little nap on Saturday afternoon and Mari and Jack got very excited with the idea of coming to read to me while I rested. Our roles were reversed and I rested while they sat on the bed and read aloud to me. At some point I must have slept because when I woke up they were gone, books were scattered all over the bed and there was an entire beanbag chair left behind- on the bed. Mari is also writing little stories now and she laughs and giggles at her own silliness. She will turn six years old in two months and seems wise beyond her years. I forgot to bring my camera so I didn't take all the photos I would have liked, but this one of Matthew I took with my phone is my favorite. He will turn two in November.  He likes to imitate his big brother, Jack who is ever on the go. Jack wears a cape. You can imagine the rest : )
Posted by Leonora