Two thousand one hundred seventy-three: Miles driven on our road trip.
Fourteen days: Time we were away from home.
Memories: Countless

Our road trip has sadly come to an end. In retrospect, we played in mountains, sea, and cities. We saw some old friends and much of our family. We enjoyed time alone as a couple and we enjoyed time among thousands of strangers. It was perfect in every way.
The final leg of our trip took us to our New York home. As I've mentioned before, my third cousin Matthew bought my parent's house. It is right next door to his parents' house (who would be my second cousin). My mother and two of her sisters first built in that neighborhood in 1952. One of the sisters is Matthew's great grandmother and her sister was my mother. The generations now continue  living there through Matthew and his children. Last week the cousins invited me and my sister over to see the renovations Matthew did on the house. It's still a work in progress and so far it's a beautiful a transformation. Most of the work has been exterior and structural and the entire exterior of the home now looks new. However, when we entered the kitchen it looked the same as the day we left it one year ago. It felt as though my mom might walk in at any moment and I had to pause to think of her and give my sister a hug. Otherwise we were thrilled to see everything being updated and restored.
What shocked me the most was when we saw the basement. My cousin had gutted all the paneling, shelves, and partitions that my dad had built over a span of fifty years. The basement I grew up with had been divided into four 'rooms' with various sorts of paneling covering all the walls. That basement was an extension of our home and we played down there for endless hours during our childhood.We had a wood stove to heat the area in the winter time so we could play down there year round. Now, what we saw was an empty shell and our eyes were able to scan the basement in its entirety. As we walked down the stairs and adjusted to the space, our eyes were drawn to colorful paintings on the foundation walls. Slowly turning, we saw not one wall, but three walls all painted in a mural. I couldn't believe the endless scene that spanned three walls of the basement! As I stepped closer, I saw paintings of bomber planes and paratroopers dropping over snow covered mountains. I realized it was a scene from my father's war. I was in shock. I had never seen this mural before, nor had my sister. Obviously the magnitude of what he saw in the war was forever embedded into his mind's eye. From what I've read, this scene depicts one of the biggest drops into battle during WWII. I'm sketchy on the exact history, but I thought they were dropped into France, not Italy as this painting implies. It was a scene he could not forget and felt compelled to paint onto his basement walls. And then cover up. My mind tried to calculate when my father could have painted this. The best I can figure is that he painted it sometime between 1953 and 1961.
My father is no artist. He was a musician and a creative man but, his painting skills were  untrained. In his retirement years he took up painting as a hobby. His older sister, my Aunt Isabelle, owned an artist supply store and she kept him supplied in canvases and paints. He had a good time painting things to hang around the house and he and my mom enjoyed them. This mural is a good example of his painting technique. His impetus was to get his idea painted and not so much on how he did it.
My cousin said is going to leave the mural there. I admire him for the respect he has shown for my parents throughout this past year when he purchased the house and now in its renovations. He's a great guy and I am proud to call him family. 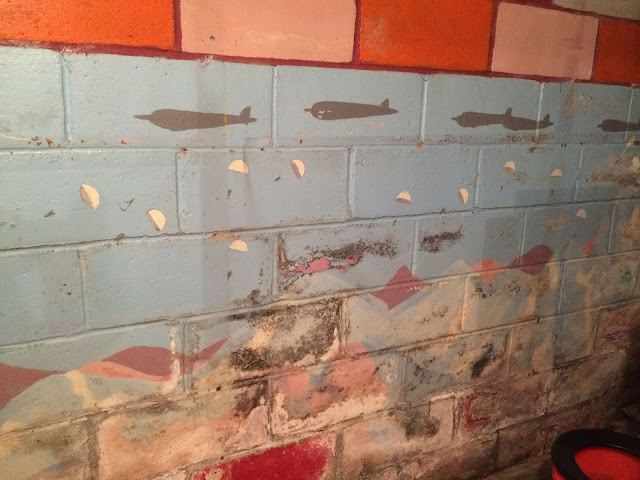 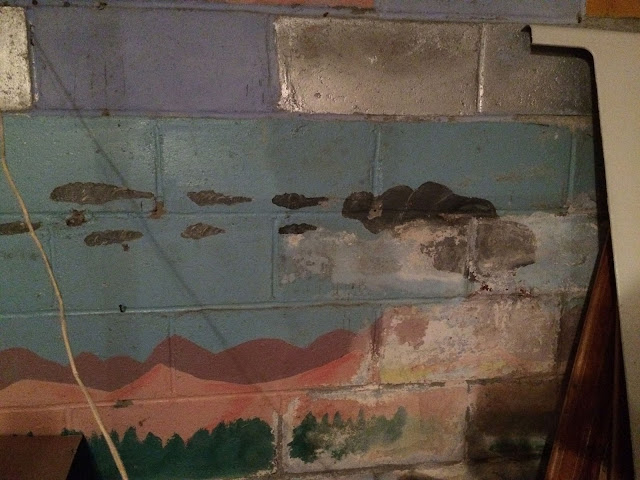 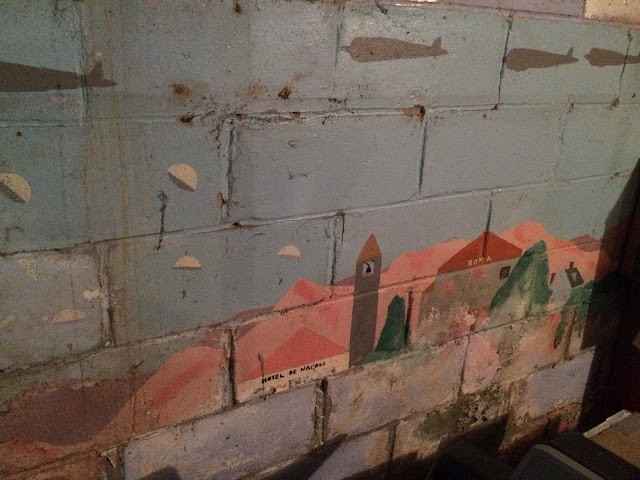