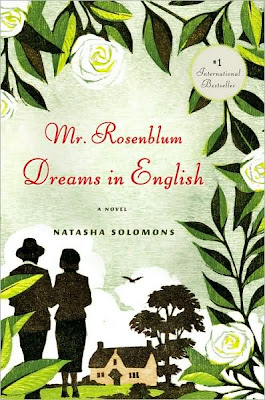 1. After a morning of errands and chores, I settled down to finish my book, Mr. Rosenblum Dreams in English by Natasha Solomons. This has turned out to be one of my favorite books so far this summer. The characters were endearing, particularly the wizened old man named Curtis whom Jack befriends in Dorset. I also liked Sadie's mother's handwritten recipes which she grouped under titles such as, "Food to Soothe Troubles", "Wet Weather Treats", and "Cakes to Heal a Broken Heart". Inspired by the author's grandparents who journeyed from Berlin to Blackmore Vale in the 1930's, this is an immigrant's story about desperately trying to fit in.
2. Steve puts MP3 music discs in my car's console and they're always full of surprises. Tonight we popped one in the player and Tess and I were bouncing down the road to "Super Freak" and other assorted disco tunes. (I like this song only because it reminds me of Olive's dance scene in "Little Miss Sunshine") I was not at all into disco back in the day, but we had a great time driving with it tonight.
3. Some of the teens gathered to watch the opening ceremonies for the Olympics. I hung around with some of the other parents (who are also friends) and it was much more fun watching this sort of event with a group.
Posted by Leonora