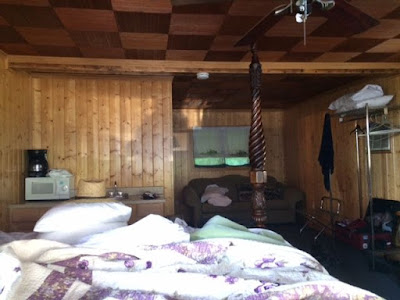 Before we left Lake George I snapped two photos of our motel room. It was the funkiest room I've ever seen at an old motel/cabin resort from a bygone era. The enormous king size bed didn't quite fit into the room, so they placed it in the only large enough space available which was right in the front picture window. When lying on the bed, we were in full view of the parking lot as if being on a stage for all to see. This placement caused the bed to be in the middle of the kitchen area at the front of the room instead of in the back. We had a counter and sink on our left and a refrigerator straight ahead. The owners opted for no bedside tables or lamps and our lone light was a bare fluorescent bulb hanging down from the ceiling fan above our bed. We wondered what was up with this huge, ornate king-sized bed in this little Adirondack motel room. It was so weird! We had a few good laughs about it all. It was clean enough and the bed was comfortable so it served its purpose for a quick shower and comfortable place to sleep while we spent our days out on Sarah Island. Ironically, the place was  packed full of travelers all week long and had no vacancies.
The cabins back a wooded area and on the second night, right at bedtime, an odoriferous skunk let himself be known to all the sleepy residents. It wasn't your average skunk odor; it was strong and nauseating. I couldn't decide whether to close the windows and trap the odor in or open them wider and turn up the speed on the ceiling fan to blow it all over the place. It was a lose/lose situation and we basically just had to wait for it to go away. What can we expect when we want to vacation close to nature? 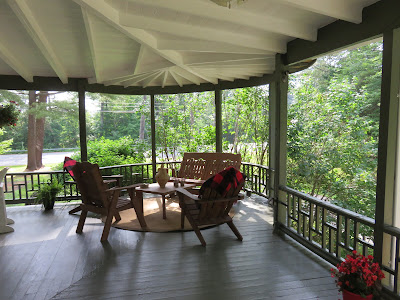 All this made our Airbnb at Schroon Lake feel like a dream. The house was originally built in 1922 and served as the administration building for a Jewish boys camp. The current owners have made it homey and comfortable and offer rooms at a rate of $65/night which is far below any in-season hotel or cabin in the area. The one caveat is that three rooms share one bathroom. We lucked out on the first night because we were the only guests and we had it all to ourselves. On the second night, one other room was occupied but we never bumped into each other for the bathroom. My favorite "room" in the house was the expansive front porch. I felt myself relax here and become re-energized for the second week of our trip.


We popped over to Brant Lake on the 4th of July to visit family and revisit Steve's childhood summer stomping grounds. Sister-in-law Joyce and I kayaked while Steve and his brother visited with old friends at Mead's Cottages. Mark and Joyce grilled a nice lunch and then Mark gave us a tour of the lake on his boat. I hadn't been on the lake in thirty-five years and it brought back many good memories from when Steve and I were dating. Later that evening, we all met up in Schroon Lake village to watch the town's 4th of July parade. There were fire trucks and boats, a high school band, a mariachi band, horse riders, and a Pipes and Drums band. The marchers all flung candy to the children. It was noisy and upbeat and children darted to and fro to gather candy. After the parade, everyone made their way down to the beach on Schroon Lake to wait for the fireworks. We had two hours to wait for fireworks but, the time passed quickly with all the people to watch, hot dogs and ice cream to fetch, and music to hear from the bandstand. It was small-town, old-time stuff and it made the evening really enjoyable. The fireworks were displayed from a barge on the lake and many folks came out on their boats to watch from the water. The boats' lights twinkled like fireflies all along the lake's surface. The fireworks were grand and when they finished everyone departed in one big swell to walk, en masse, a mile or so to our parked car. It was a warm evening and the walk felt good after all that sitting. Folks talked quietly as they walked in their groups and the night was hushed with a feeling of a day well spent. We relaxed back at our room after a full day of sun and activity. We had the fan gently blowing the cooling, Adirondack night air lulling us off to sleep.