My definition of gardening is, "If at first you don't succeed, try, try again." Gardening might be a science but it's also a creative process that produces many fails. For a stubborn character like myself, those fails are all the more reason to replant, redesign, and make improvements. Each year I try to convince myself that the garden is finished and nothing more needs to be done, yet each year I cannot help but create something new. There is always room for improvement and creativity. I'm also a pushover at the nurseries where it is extremely difficult to turn away from all that beauty.
I've been digging in the dirt since my earliest memories, helping my father plant his vegetable garden. It was a seasonal celebration for him, bordering on a religion. I also discovered, at a young age, that flowers could be dug up and replanted. This was genius to me! In my childhood neighborhood, a dear, elderly, Russian man and wife were having their house moved. Literally, the entire house was being lifted off it's foundation and moved up the road about a quarter of a mile to make room for an interstate highway. They were avid gardeners and their garden contained much more than the average marigold or petunia. They had berry patches (where I tasted my first gooseberry) and a myriad of perennials and rock gardens. The mister had an old claw foot bathtub in his backyard which was a great novelty to us children. We surmised and giggled that he must bathe out in his yard. They were kindly neighbors whom everyone loved but they never had children and they kept mainly to themselves in their lovely garden. After the house was moved, many of the smaller plants were left behind. It appeared that no one was bothering with all these lovely, orphaned plants. I was eight or nine years old at the time and I recall taking a spade and digging up lily-of-the-valley and bringing them home to my mother's garden. It was her first perennial aside from her irises, and it was my initiation into the world of transplanting. I was hooked. In later years, as my father continued with his vegetable gardening, I helped my mother create a few perennial beds. In Steve's and my first apartment in the city, I planted tomato plants in tin cans and subscribed to Mother Earth News with the dream that one day I would have a garden of my own. Eventually that dream became a reality and it has been a joy ever since.
So here we are, fifty years after that first Lily-of-the-Valley. Last year I told myself the garden was enough as it stood. It was time to scale back. Alas, this year, we put in a new patio area with new planting beds. It was a vision I couldn't resist. I am hopeless. Steve is a wonderful help and everything we do is a team effort. I couldn't do any of this without him. This installation is a do-it-yourself project that will evolve over time, hence the fun and joy of it all. Plants are started- some will make it and some will not. Vegetable beds still need to be built and more stone needs to be spread. 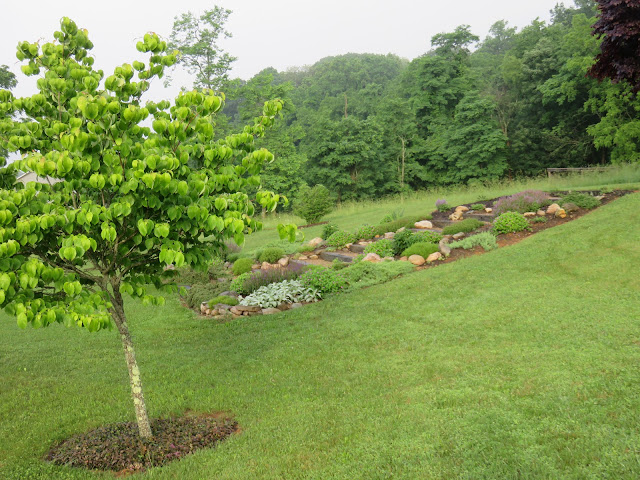 Another garden that has evolved over the years (AKA Battle of the Wire Grass) is what we call the Step Garden. It's simply a scar on the hill where we can walk up to the back of the property. Steps are scavenged railroad ties. Stones were a gift of scavenging on our friend's family farm. Many of the plants are also gifts of division from friends and family. 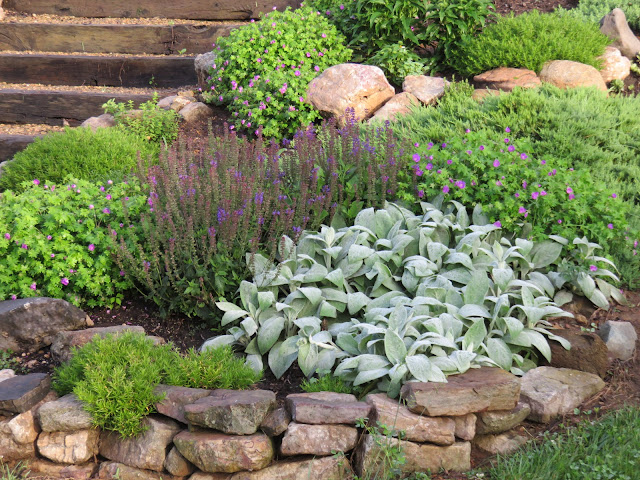