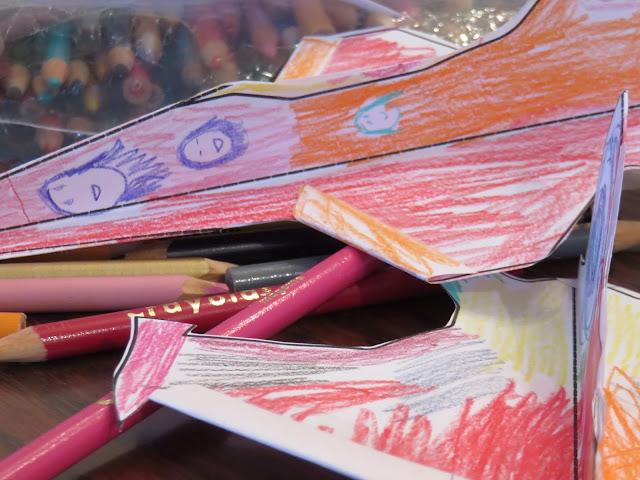 When Steve was in college he started making paper airplanes. The spare room in our apartment was his study and he spent many late nights at work there with his books. The only thing that I can recall adorning the walls of that room was a string tacked across the wall with dozens of homemade paper airplanes clipped to it. He created planes that glided for yards and yards, planes that spun in flight, and planes that looped-d-looped. He weighted planes with paperclips or pieces of whatever to give them the right stability. For sport, he hung balloons from the door jambs and taped straight pins to the noses of his planes so we could fly them into the balloons and pop them. We flew them out of our second story apartment window to see how far they would go and we searched for wide open spaces without breezes to test flight certain models.I treasure the memory of how something as simple as paper and tape could occupy our penniless evenings during those college years.
Steve's paper airplanes were a far cry from the typical, triangular paper airplanes I learned to fold as a child. I am clueless when it comes to engineering things. But, Steve designs his planes with function and form and he never tires of drawing new designs. Part of the fun is trying them out to see which ones fly better. He has amassed quite a fleet of planes and they are all now drawn on the computer. When it's time to play, he just prints them off.
I must admit that I wasn't the enthusiastic audience Steve deserved for his paper airplanes. They were fun, but I lost interest quickly and I didn't appreciate them from an engineering standpoint. Years later, when our girls came along, Steve had a new audience for his planes. They embraced the paper airplane concept without question and quickly discovered that coloring them was also a lot of fun. A second generation of paper airplane flyers was now born. My involvement in those years was picking up all the scatterings of paper airplanes from the floor... over and over and over again. To me they were like litter strewn about after a parade. I would pile them in a corner or collect them into paper bags. Once in a while I would rebelliously throw some away without asking. Those that I found far under the sofa, covered in dust were my least favorite. But, usually I saved them for a while in case one of the children came looking for that one, very special plane they had colored.
Steve likes to amuse children with the planes, but not every child shows interest in them. If he sees a fidgety little boy in church, he will slip him a paper airplane folded from the church bulletin. If their eyes light up, he might hand them a plane folded from home for the next few Sundays so they can play with it after church. Now that our grandchildren are old enough, the archive of Steve's paper airplane designs has re-emerged to entertain a new generation. Our four-year-old grandson, Jack, has shown a keen interest. He likes to stand on a chair and throw the plane hard to see how far it will go. Jack is only four years old but, he has a long attention span for the planes. His sister, Mari, has once again popularized the art of coloring the planes. During the children's last visit, they spent long stretches of time coloring, folding and flying paper airplanes with Pop. Our kitchen table looks like it did two and three decades ago, strewn with paper airplanes, scissors and tape. Steve is smiling. I'm smiling, too. I'm also back in my role of bending to pick up the dozens of paper airplanes strewn about the house like that same old litter after a parade. I just finished collecting a paper bag full and tucked them aside in a corner of the kitchen. They're all brightly colored and cheery, waiting for the parade to return. 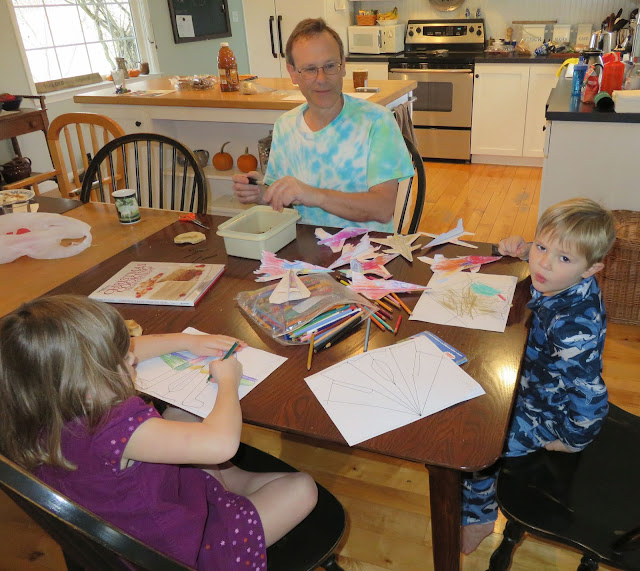 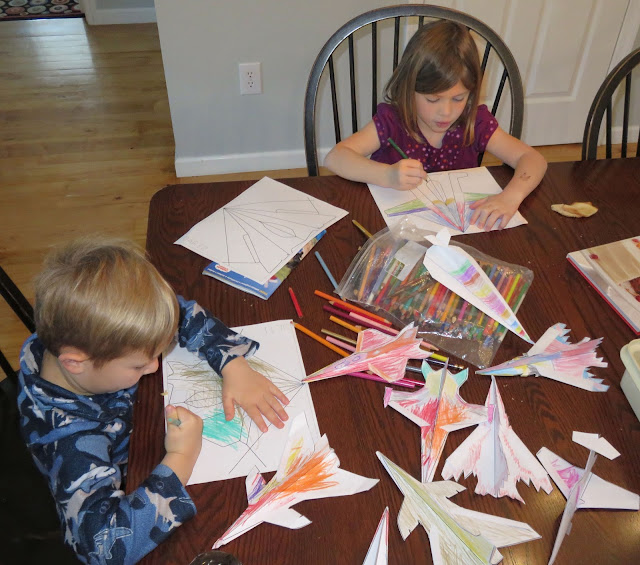